Since I live and teach Qigong in one of the largest Yoga areas in the world I have a lot of students who are either Yogis or have substantial experience in Yoga. Some of them have experience in both Qigong and Yoga. Many of them come to Qigong out of curiosity or they are looking for something different. I actually started mild Yoga practice when I was 12 years old since both my parents did Yoga. I have been to some Yoga centers and trained Yoga off and on throughout my life. While martial arts and Qigong have remained my central practice, Yoga was always a supplemental practice to me as I enjoyed the feeling of the deep stretching and other feelings associated with it. In my time here in relating Qigong to people who practice Yoga I have sought to be able to express Qigong particularly Bagua to them in a way that they could understand it. I have also researched through reading and my own personal experiences the differences and similarities in the two practices.  My purpose is not to prove one practice is better than the other or say one is right and one is wrong. I want to simply show the differences and similarities.

Here I refer to the Bagua I practice as simply Qigong as it is a type of Qigong.

An expression of Yourself

The way you practice Qigong eventually becomes an expression of yourself. When I want to move fast I move fast, when I want to flow slow and soft like water, do move like it. Is this true of Yoga? I assume that is why different people choose different styles of Yoga from Vinyasa Flow to Yin Yoga.

Qigong not only works on flexibility, but works on elasticity of the body. They say like a rubber band, if it is stretched too much it loses it’s elasticity. There is a lot of strengthening exercises in Qigong that stretch at the same time strengthening such as our 8 stances.

One of my friends who is a Yoga instructor informed me that she was taught at one of the teacher trainings that many older Yogis who have been practicing for a long time are starting to have hip problems and spine issues.

There is no other Qigong, tai chi or yoga that I have experienced that can make your spine and back supple the way Bagua can. Only dancers I have seen can grasp the subtle articulations of the spine without prior experience.

The feeling of a completely supple, loose and flexible rib cage, spine, back, torso, hips, and waist to the extent that your body can grasp all the subtle articulations is amazing. Once you put together the foundations of dou Zhang and dragon back you can then begin to build, like building a house. Each successive palm teaches you a new way to add new articulations to the spine and back movements thereby allowing you to go deeper into your body, gaining more mastery over your body and your Qi.

Healing muscle fascia with Qigong such as in the 8 Animals Qigong is something I never saw that could be practiced with Yoga.

Bagua has a rhythm that my body craves that Yoga simply cannot fulfill. Yoga can be more tiring as I feel the rhythm of Bagua carries you through. I feel. much more of a flow in this regard. The other closest practice that can come to this would be dancing, but the added benefit of Qigong is the Qi.

Practice Mats in Qigong and Yoga

Don’t need a mat to practice which equals freedom. Practice on the beach in the forest or anywhere, anytime. Whereas, in the practice of Yoga, you need a mat to practice the majority of the postures. One of the greatest joys I get from Qigong is practicing in the many different environments, spontaneously, anytime, anywhere.

I would venture to say that Yogis are the masters of stretch in that they have combined western anatomy with a practice that has been devoted to development of stretching. Yoga has the deep hip opening that I never learned in Bagua the deep stretching. Bagua does have stretching taught aside from the Qigong practice, but it is more like supplemental stretching.

What Yoga Taught Me about Qigong

In Yoga your breath can change the shape of your structure as it comes up along your spine filling your rib cage, etc. it also changes the shape of your spine. As I was doing circle walking I used this technique to see how it affected my animal postures. I noticed a significant difference in feeling the posture and how the breath changed the shape of the posture. I felt I could make nice minor adjustments on each successive exhalation going deeper into the posture.

Another part of this breath is that in Yoga you are cutting off a part of the body in the different posture for the breath to move while at the same time opening another part. Using this methodology I also observed this effect as I was holding different animal postures while circle walking Qigong. There was again a significant difference in noticing how the posture effected the breath movement and also maybe a deeper purpose and benefit to that animal.

After I finished the circle walking I felt really full of Qi. My lung and Dan Tian capacity grew a lot as I was taking full Dan Tian breaths in conjunction with full lung breaths as opposed to only belly breathing in Qigong and or lung breathing in Yoga. There were noticeable positive results in terms of expansion in these areas afterwards.

Static Vs Continuous in Qigong and Yoga

Many postures in Yoga are held statically and there are slight rest periods between because the postures can be taxing on the body. A complete set of Bagua should be done continuously as one movement flows into the other, creating a specific Qi flow throughout the body.

Qigong can be practiced anywhere, anytime, such as standing in line, sitting in your car, riding a motorbike even walking down the street. Can you do this with Yoga?

Yoga focuses on locking the perineum with primarily deep lung breathing. Qigong emphasizes Dan Tian breathing on most exercises, but also includes deep lung breathing on other exercises as well as various kinds of perineum pumping in coordination with the breath. In many types of Yoga the energy is brought up the spinal column until it reaches the chakra in the crown of the head. In Qigong, the energy is stored in the Dan Tian and then guided to the extremities to create a flow through the meridians, circulating and pumping the energy throughout the body. Both Qigong and Yoga emphasize breath energy, concentration, relaxation, and willpower. 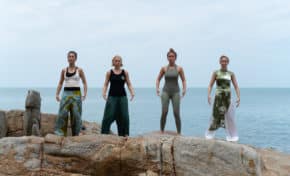